Be a Human Billboard 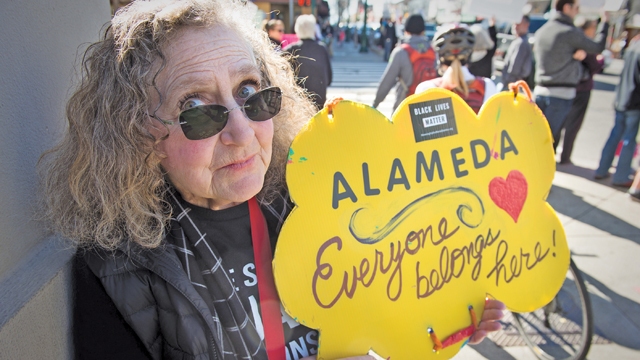 Ruth Smiler says, “Alameda is changing, but it retains the small town charms and neighborliness that make us residents love it.”

Social activist Ruth Smiler is on a mission to support racial justice.

Stemming from her youth and days at Harvard, Ruth Smiler has always cared about social issues. Today, through weekly vigils in Alameda, she is taking direct action to raise awareness of racial and social injustices. Smiler wants to help turn anger and sadness about prejudice and inequality into nonviolent, gentle civic engagement. Recently retired from her previous occupations, Smiler is now devoting her time to standing up for human dignity and a sustainable world.

Brief me on your background.

I moved to Alameda in 2010, from Massachusetts, having lived in Vermont for 26 years. I grew up in Manhattan, Kansas, home of Kansas State University. I have had an eclectic work history: textile artist, wearable-art cottage industry designer, antiques shop owner, B&B co-owner, and dog trainer. Since coming to California, I’ve retired and now have the freedom to follow my passions by volunteering with various groups, including Muttville Senior Dog Rescue, Cat Town Oakland, the Alameda Library Cafe, and the Ella Baker Center for Human Rights. I was very actively involved—to the exclusion, in fact, of doing anything else—in the Bernie Sanders campaign. When that ended, I had time and energy and momentum to continue political activism. Human rights issues have always been important to me. My father, who worked for UNICEF, had a strong public service ethic. After the Bernie campaign, I began exploring ways to make a contribution to what I consider the No. 1 critical social issue in this country. I learned about SURJ and felt in sync with their approach.

SURJ is an acronym for Showing Up for Racial Justice. It is a national network organizing white people for racial justice. There are over 100 local chapters, of which SURJ Bay Area, centered in Oakland, is one. SURJ believes that white people must be mobilized, that we must end white silence, that we must recognize how white privilege has isolated us, and made us complicit in the injustices that afflict people of color and other marginalized groups in our communities. SURJ explicitly supports the Movement for Black Lives. Their motto is, “We envision a society where we struggle together with love, for justice, human dignity, and a sustainable world.”

What do you think are the key social issues we face today?

Racial justice and income inequality. We have fallen short of our founding ideals of “life, liberty, and the pursuit of happiness,” of “all men are created equal.” Our failure has disproportionately affected people of color. I have long believed in the old-fashioned concept of the social contract. Those words are never heard nowadays. Many young people might think it has something to do with social media. We need to regain and recommit to the social contract. As Martin Luther King Jr. said, “We must all learn to live together as brothers or we will all perish as fools.”

In Vermont, I served on three different school boards. It became clear that when we say “our children,” we must be referring not only to our own kids/grandkids, our neighbors’ and friends’ kids, but to all children now living in our country. We won’t solve the problems in our schools or neighborhoods, our cities, our country unless we understand this and act accordingly. Addressing issues of economic justice, criminal justice, environmental justice, everything is dependent on operating from a commitment to the social contract. Globally, I think climate change is our biggest challenge.

Do you think we have gained ground on any of these issues?

No. Moreover, with the Trump presidency, progress made over the last half-century is threatened.

Why did you choose Alameda for the weekly vigils?

First, I’d like to clarify the relationship between SURJ and our Alameda vigils. I heard about human billboard vigils through SURJ, but they are not SURJ events. I organized the vigils with my colleagues in Alameda Progressives. We patterned our events after the human billboard events held weekly at the corner of MacArthur and Fruitvale in Oakland by Neighbors4Racial Justice who have been at it for about two years. They believe that their model can be applied to local neighborhood groups as an effective way to raise awareness. I agreed with that, brought the idea to Alameda Progressives, who enthusiastically got behind me to make it happen. Why Alameda? Because Alameda is my home. Alameda is changing, but it retains the small town charms and neighborliness that make us residents love it. At our first vigil on Martin Luther King weekend, counting children, nearly 70 people showed up—families, seniors, adults, tots in strollers—including people who came from neighboring towns. I think it shows that people are eager to have a visible way to gather together to express their values. Tolerance has a long history in Alameda, which has recently become a sanctuary city. Everyone is encouraged to come any or every Saturday from noon to 1 p.m. to the corner of Park and Santa Clara and join our friendly human billboard demonstration. 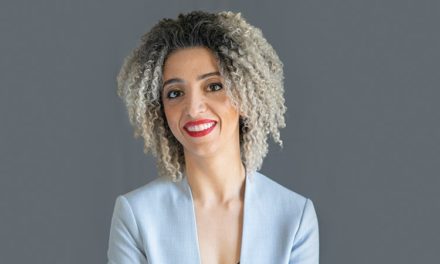 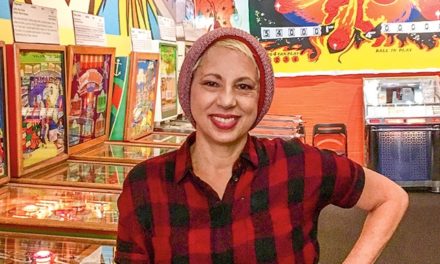 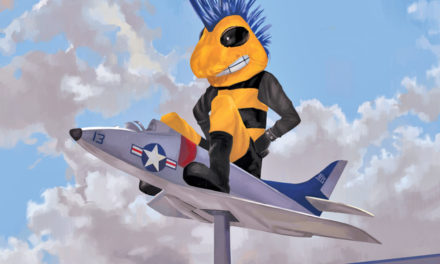 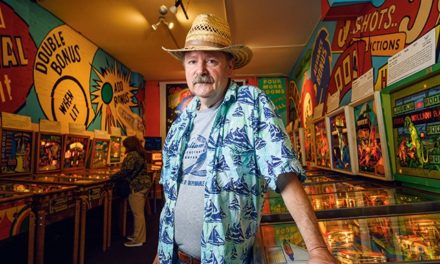