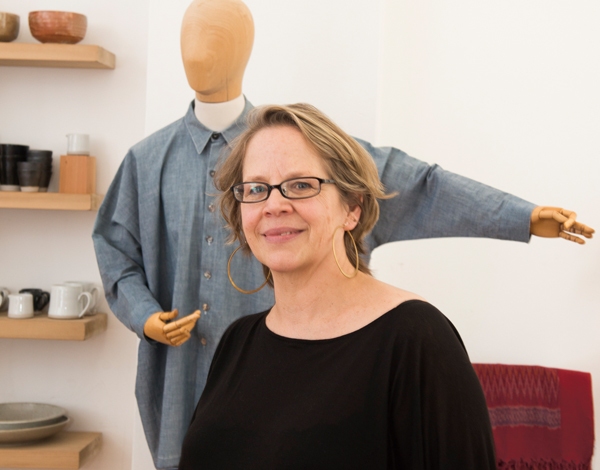 Elaine Hamblin of Kosa Arts is moving away from gift shop items toward more apparel and accessory items.

Elaine Hamblin, owner of Oakland’s Kosa Arts, worked in the apparel industry for years, but all the while, she considered how she could re-engage her creative aspirations in apparel and interiors. The pull was strong, and after laboring in a corporate environment (at big Bay Area brands like the Gap and Levi’s), she took the plunge and opened Kosa Arts in Oakland’s rapidly changing Uptown district. Having lived in New York City for a long time, Hamblin wanted to bring a little piece of that Brooklyn vibe—where independently owned boutiques and coffee shops line the streets—to be part of the growth that’s taking place in Oakland. The block where her store is, on 19th Street next to Drexl, a bar, reminded her of NYC’s NoLita district, with older architecture and a narrow street. Remodeling the shop, which was previously a dry cleaner, took a lot of effort. Along with her husband, Joseph, Hamblin dropped the ceilings, built custom shelving, and stripped away aged linoleum to reveal beautiful Douglas fir flooring. All this work is evident as you step into the shop—it’s light and airy. With repurposed architectural finds serving as tables, it feels homey, a comfortable place to spend your dollars in support of local business.

In addition to her own KOSA clothing line, which features easy, soft shirts, dresses, and tunics that can be dressed up or down, Hamblin is committed to stocking goods made by independent makers in small batches, such as clothing by Oakland designer Mira Blackman, scented soy candles by Illuminati Waxworks (another Oakland maker), and other West Coast crafts. Hamblin estimates at least 70 percent of the items she carries are made locally. However, she is also fond of makers who produce beautiful work and maintain a connection to the shop, like ceramics by Ray G. Brown, a clay artist out of London. While she avidly took suggestions about what customers wanted—more color, more home goods—Hamblin felt the store was feeling too much like a gift shop, and is now refocusing on scaling back, carrying more apparel and accessory items for men and women, as well as jewelry and body care products, and fewer home goods. It’s all an effort to appeal more to the careful consumer. For the future, Hamblin is planning pop-ups featuring other designers, as well as workshops, especially around the holidays. A longer-term goal is to build an espresso and tea bar within the store. In a transitional neighborhood on a block that’s not yet known as a retail source, it’s important to Hamblin to build community, and these changes, small and large alike, will all serve that purpose. Hamblin wants current and future customers to know that she, and, by extension, Kosa Arts, celebrates and encourages creativity and meaningful livelihoods. She hopes to inspire others to nurture their creative interests and support artisans.

Rumors of College Avenue’s beloved Diesel bookstore going up for sale caused a bit of trepidation among booksellers and book buyers, who have long been weathering the Amazon storm. However, there is more to the story. Longtime Diesel owners John Evans and Allison Reid approached then-store manager Brad Johnson about selling Diesel—to him. As Johnson noted, “… Many people immediately see red flags when this kind of thing happens. ‘They must know something! Why else would they be selling?’” But, as Johnson also noted, the store’s previous owners maintained an environment of transparency such that all employees knew how much the store was bringing in, the ways in which it was struggling, and how to accomplish every task necessary in the store.

All that is to say that Johnson knew the store was moving in a healthy direction, as more consumers are committed to shopping locally, and independent bookstores are regaining some footing. But, if the store was doing well, why bother to sell at all? Johnson said Evans and Reid wanted to change at a healthy time, instead of being forced to pivot under duress. He said Evans and Reid “liked how

I’d been carrying myself as a manager of the store and the overall sense of ownership I took with the role. They also saw my love for bookselling and the East Bay as a reflection of themselves. Why not give it a try?”

It’s not been a simple process. Because he didn’t have enough capital on hand to purchase the store outright, Johnson had to raise money via loans and donations from the community, through which he ended up with $150,000 over the course of the summer—which show how important the store is to local denizens.

As of Sept. 1, Diesel Books transitioned to East Bay Booksellers. The reason for the name change is to distinguish the store from the others under the Diesel umbrella, in Larkspur and Santa Monica. Johnson wanted to “proudly fly the East Bay flag for all to see,” and it was important to him to keep “booksellers” in the name because he felt “the centrality of our role is crucial to what distinguishes us from other retailers that just happen to stock and sell books.” The store’s stock will be a reflection of the community just as much as those running and staffing the store. Johnson said, “In some ways we are the cultural anachronism that so many people seem to be craving: a place where the exchange of money (which keeps the lights on each month) is matched by the exchange of ideas (which compels us to turn the lights on every day).”

Besides the change in name, logo, and stationery (but the familiar outside neon Diesel Books signage will remain), East Bay Booksellers will not change its role as a hub for literary events. It will continue to host readings by local authors and those on tour and will maintain a diverse collection of books.

Before Jeni Maus established Found Vintage Rentals, she was busy running a household, as well as designing her photographer husband’s studio. The latter was the catalyst for starting her business. She decorated the studio with vintage furniture and décor, which piqued the interest of a visiting wedding coordinator who asked if Maus had ever thought about renting out the vintage pieces for weddings. An internet search revealed a dearth of options, and so, in February 2010, Found Vintage Rentals came to be.

Found has been providing curated vintage selections for weddings, photo shoots, home staging, and more up and down California for five years, and, when Maus realized her trips to Northern California were becoming more frequent, she decided it made sense to establish a warehouse in this part of the state. She selected a home base in Emeryville, which makes it easy to stock items for use in the East Bay, San Francisco, and Wine Country. Maus is fond of the Emeryville location; she said it’s “within walking distance of our warehouse, we have great restaurants, shopping, a dog park; literally everything you need is within a mile. I love that we’re in Emeryville.”

Initially, Maus imagined she’d primarily service weddings and events, but business has grown such that she rents her wares for commercials, corporate events, and even talk show sets—anyone seeking a bit of vintage charm to enhance a gathering. She buys what speaks to her, but always keeps in mind what clients are asking for, which include lounge vignettes and custom re-

Visiting Found’s 14,000 square foot warehouse can be an overwhelming experience but, as Maus said, you can, “expect to see things you’ve never seen, and things being used in different ways.” A vintage Hathaway bar may catch your eye, or else the reclaimed wood farm tables or bentwood chairs may. Maus likes to remind people that vintage goods aren’t necessarily just one-offs; they can be 20 or 40 of the same thing, which is perfect if you desire to seat 35 people in the same style of chair or require uniform dressings for your wedding. And if the temporary aspect of renting is too much to bear, Maus also runs The Found Shop (FoundRentals.com/inventory/item/hathaway-bar/), where you can buy vintage furnishings outright—everything from tables to armchairs to benches.

With an appointment, you can visit Found Vintage Rentals at 5743 Horton St., Emeryville, or check out the website at FoundRentals.com.

Do you have retail news for Retail? Email it to Editor@TheMonthly.com. 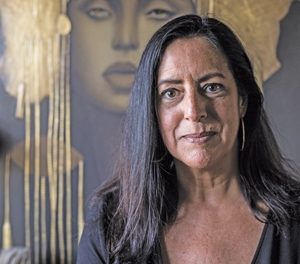 Strength of the Invisible Queens 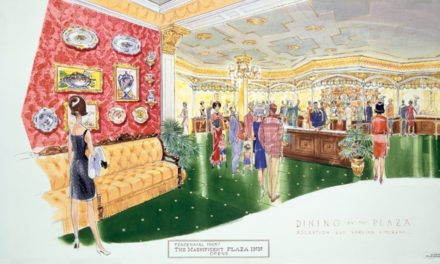 What Would Walt Eat? 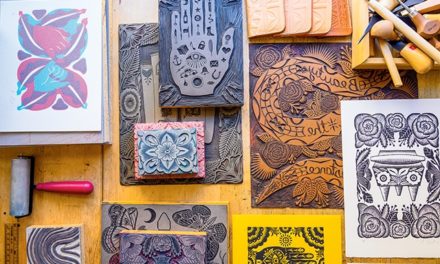 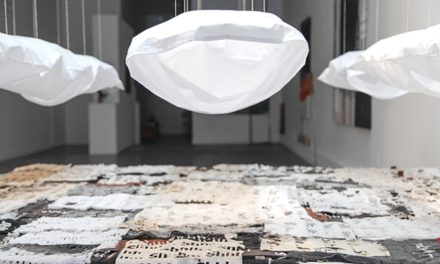 Two Artists Team up for RoCoCo