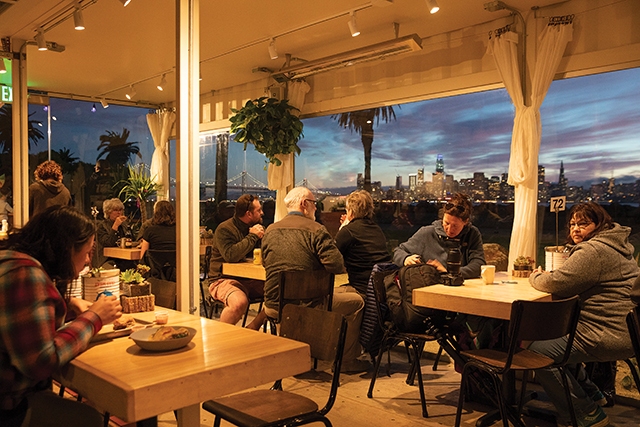 The view from Treasure Island’s MerSea restaurant is captivating.

MerSea and Aracely inhabit a new frontier well worth exploration.

It’s only a matter of time until Treasure Island becomes another trendy, gentrified San Francisco neighborhood. The omens of transition in late 2018 are mostly empty lots where Naval base buildings used to stand, structures in various stages of demolition or renovation, long spans of chain-link fence, and mountainous piles of dirt in areas earmarked for development. But more promising signs include the bicycle access from the eastern span of the Bay Bridge, a marina and a palm-studded Great Lawn on the western shore, and two attractive cafe-restaurants that are well worth the short commute from The City or The Town.

Aracely Cafe, which opened about three years ago, and MerSea, which arrived last spring, may be banking on the future completion of an estimated 8,000 new residences, nearly 250,000 square feet of commercial, retail, and office space, and three hotels on the 400-acre island that was built for the 1939 Golden Gate International Exposition and housed the U.S. Naval Station until 1997. But both are ready for prime time, offering elevated takes on American classics and California cuisine and taking superb advantage of their unique island settings.

Aracely reflects the loving labor of chef-owner Linda Edson, whose fine dining experience at Masa’s, Campton Place, The French Laundry, Michael Mina’s, and Gary Danko’s prepared her to take over the Axis Cafe on Potrero Hill, which she renamed after her daughter, Aracely, and then moved to the north end of Treasure Island. You approach the intimate jewel box of a restaurant through an exterior garden patio that features a fire pit, couches, strings of lights, and heat lamps. Once inside, you face a sleekly illuminated bar beyond a large communal table flanked on the left by a fireplace with loveseats, and on the right by smaller tables pulled up to banquettes along the wall, all creating the sense of a cozy embrace, insulated from the outside world.

There were only a few other patrons — who seemed to be regulars — during our Aracely dinner, which made the 30-minute wait for food to come out of the kitchen a little weird. Then, the ceviche ($9), ordered as a starter, arrived with our main dishes — roasted lamb meatballs on polenta ($18), and a grass-fed beef cheeseburger ($11) — and a side of Brussels sprouts ($4). But if the timing was off, the preparations were excellent. The fish and shrimp ceviche was quite spicy, tangy with red onion and slices of fried lime. The Brussels were crispy and chewy, zested with lemon, and garnished with remoulade. The reasonably sized burger was cooked to Robin’s well-done order, sandwiched on a good bun, and not overly embellished with cheese, pepperoncini, and fried onion. The meatballs had a soft, crumbly texture and melted tantalizingly into the bed of fluffy polenta, accompanied by a generous helping of al dente green and yellow squash. Like the backgrounds of Edson, born to a French mother and an American father in Argentina, and chef de cuisine Ramon Villarreal, raised on a farm in Mexico, the wide-ranging Aracely menu is a multicultural mix, from chilaquiles and fish tacos to seared ahi, beef tenderloin with chimichurri, an empanada of the day, and lots of vegetarian options. 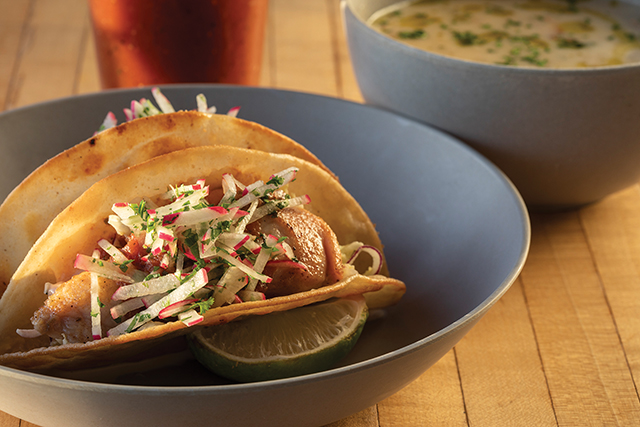 The fish taco at MerSea is messy and crispy.

I get the sense that Aracely sustains itself on the weekend brunch business and its allure as a venue for private parties and celebrations. I might have made the same assumption about MerSea, based on our first visit on a breezy October Sunday afternoon. In a fanciful assemblage of shipping containers arranged in U shape on a corner of the Great Lawn and just a stone’s throw from the water, MerSea (Old English for “island oasis”) starts with a basic menu: burgers, fish and chips, tacos, chowder, build-your-own salads, East Coast-inspired sandwiches (the Jersey Girl, with Taylor pork roll; the “Philly style” P3, with shaved pork shoulder, pepperoni, and provolone), French toast, and soft-serve ice cream. But with upgraded ingredients, sophisticated techniques, and artful presentations, chef-cofounder Parke Ulrich (Waterbar and EPIC Steak) boosts the casual fare to a rustic fine-dining experience.

For Sunday brunch, we sat side by side at a small table facing the windows, gazing out across the bay to the San Francisco skyline and the Golden Gate Bridge, and started with a standard-setting, peppery, olive-and-onion-garnished Bloody Mary. We shared a subtle, satisfying bowl of Parke’s Chowder ($7), with haddock, bacon, and potatoes, and Robin moved on to a pair of large, crispy, messy tacos ($13) filled with big chunks of fresh amberjack (cooked through for Robin, more typically seared), cilantro coleslaw, and a runny, delicious chipotle crema. At the suggestion of co-owner Mee Sun Boice, who was minding the order counter, I opted for the Dungeness special ($18, available weekends only). The succulent crabmeat was mounded atop a potato cake and two poached eggs, made more heavenly with a citrus aioli, brightened by a scattering of fresh arugula. Beguiled by the view and intrigued by the full bar, we returned the MerSea on a clear Friday evening to sit at the window (it was a little too cool and breezy to take advantage of the patio seating), and watch the sunset. With that spectacular backdrop, a couple was having photos taken, posing precariously on the rock seawall in their bride and groom outfits. As the small space filled up (there’s a second container dining room, as well), Robin sipped a glass of Boneshaker Zin ($8) from the enticing list; I nursed a zingy, bourbon-forward Uncle Bob’s 5 Point Buck (lime, Angostura, Fernet); the city skyline became a black silhouette against the darkening blue, orange, and rosy sky; and skyscraper windows started to twinkle in the falling night.

Boice had cautioned us not to leave anything valuable in our car out in the huge parking lot beyond the manicured yard and playground, an indication that Treasure Island is still more like a dicey frontier town than a safe and sound suburb. But that also means you can feel like an explorer while enjoying a great meal before the future arrives and the crowds pour in. 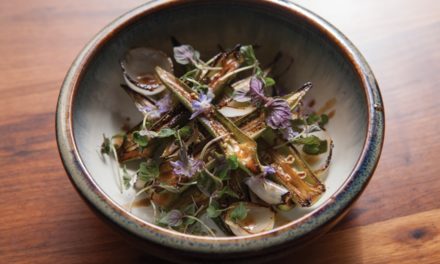 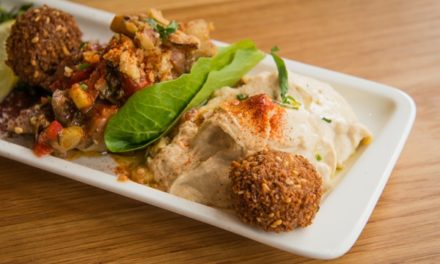 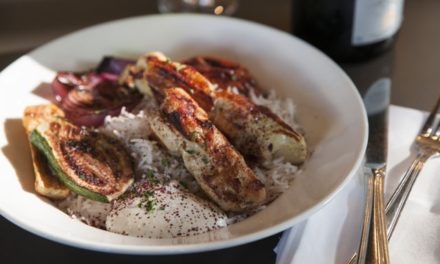 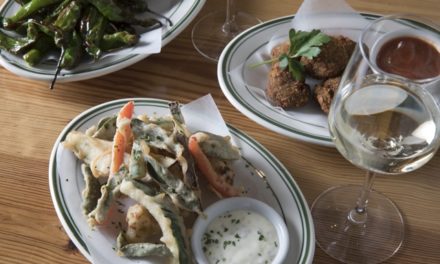