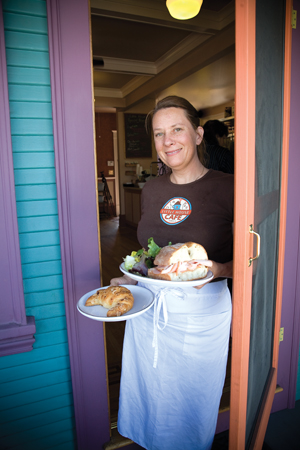 It’s not as if Alameda needs more charm. But from its self-effacing name to its cozy parlor-like interior, from the signs that direct visitors to “Please park on our grass!” to menus items with such names as “breakino,” “figgy piggy” and “gourmet at a loss,” the Little House Cafe infuses a healthy new quotient of enchantment to the developing business blocks on Blanding Avenue just west of the Park Street Bridge. More importantly for anyone in search of consistently high-quality breakfast and lunch, the Little House serves both, with manager-chef Donna Meadows and her small, efficient staff cranking out a startling variety of morning specialties, soups, salads, sandwiches, hot entrees and baked goods from top-notch fresh (and when possible, sustainable, local and organic) ingredients.
The kind of high-end but homey restaurant that sprouts like a weed in Berkeley or Rockridge, the Little House exists only because the executives at Perforce (see Business in this issue) were foresighted enough to preserve a century-old craftsman bungalow standing on the Blanding Avenue and Oak Street lot onto which the software company is currently expanding. The house was restored (by Alameda’s Buestad Construction) to its original one-story height, moved to the northwest corner of the lot and beautifully remodeled from the hardwood floors up to the box ceiling, with a full kitchen shoehorned behind the service counter and display cases.
According to Perforce’s vice president of operations, Carrie Ewing, the company wanted a great place for its employees to eat and get takeout meals, but also always intended for the cafe to be open to the public.
To make it work, Perforce, or rather the Little House Cafe LLC, needed someone with both Alameda and culinary savvy. Meadows was a perfect fit. The East Bay native’s résumé includes initial on-the-job training at Le Marquis in Lafayette; a season in a kitchen on St. Thomas in the Virgin Islands before cooking her way to Europe on a sailboat cruising to Spain; a stint in a pub in Ireland; a week at Chez Panisse before jumping to Auberge du Soleil in the Napa Valley; a spell at the Bel Air Hotel in Los Angeles; co-founding the Flying Saucer in San Francisco; making chocolate sculptures and classic French pastries alongside Alfred Schilling; and serving five years as executive pastry chef at the famed River Café on the Brooklyn waterfront. 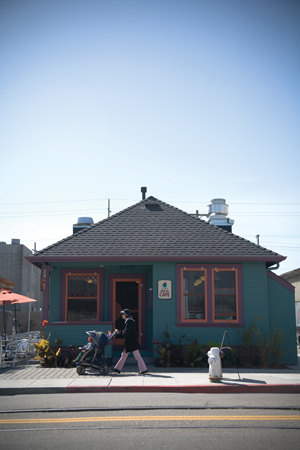 Meadows and her then-boyfriend, Justin (now her husband and father of their two children), returned to California and settled in Alameda when Meadows was able to buy the Boniere Bakery in 2000. “We were probably a little too advanced for Alameda at the time,” Meadows says of her slightly more than five-year tenure running Boniere, during which she jettisoned lard-based cakes and introduced pastries made from scratch with French butter and free-range eggs, as well as organic coffee (all before Peet’s, Starbucks and other tastemakers arrived on Park Street).
But Meadows’ gourmet touch has been a hit at the Little House since last September’s opening. Regulars (about 50 percent from Perforce) show up every morning for coffee (only a buck for a 12-ounce cup), espresso drinks, tea and hot chocolate drinks ($2–$4), pastries ($1–$4), oatmeal ($4.50), eggs and toast ($5; $6.50 with bacon, $7.50 with prosciutto) or the breakino, a scrambled egg-bacon-cheddar panini ($5.50).
Meadow’s creativity shines brightest at lunch. Salads, including Caesar ($6; with chicken $7.50) and a daily special ($5.50), and the quiche of the day ($4.50; with salad $5.50) are especially popular, Meadows says.
I’ve been slowly eating my way through the sandwiches—the “gourmet at a loss” (grilled steak with olive truffle dexcelle, $7.50) and “le French torpedo” (grilled ham and brie, $7.50)—with no end in sight; it’s only a matter of time before “the Italian job” (imported mortadella on a baguette with first-press olive oil, $6), the classic Reuben ($7) and the “veggie perfecto” (Lombardi pepper, zucchini and sheep’s milk pecorino, $6) meet their eater. Testing the daily entrees might become a thankfully never-ending task: Wednesday is burger day, but it could be beef, turkey or buffalo; and I’m hoping the skewered grilled lamb with couscous reappears in a rotation that includes pasta, salmon and anything else that strikes Meadows’ fancy (crispy potato cake with a poached egg on mixed greens, anyone?).
“We can make anything here,” says Meadows, nodding to the tiny but complete kitchen. “And when [Perforce CEO] Chris [Seiwald] and Carrie hired me, they were open to ideas because they knew my history.” 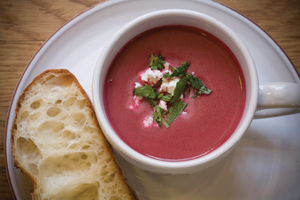 Meadows and her crew will have to kick it up a notch from the approximately 30 lunches daily they’ve been turning out, as the Little House recently expanded its hours to include Saturdays and Sundays, and Perforce will be planting another 85 or so employees in the “West Wing” upon its completion. The conclusion of the West Wing’s construction will make the Little House’s outdoor seating more inviting than it has been with jackhammers and power saws providing the soundtrack. Still, indoor dining, although limited to about a dozen seats at small granite- and marble-topped tables, will remain popular because, as Meadows says, reiterating the obvious, “It’s so cute in here.”
LITTLE HOUSE CAFE. California. Serves breakfast and lunch, 6:30 a.m.–4 pm. Mon.–Fri., 8:30 a.m.–2 p.m. Sat.-Sun. 2300 Blanding Ave., (510) 864-4044, www.littlehousecafe.com. Credit cards accepted, wheelchair access, $. 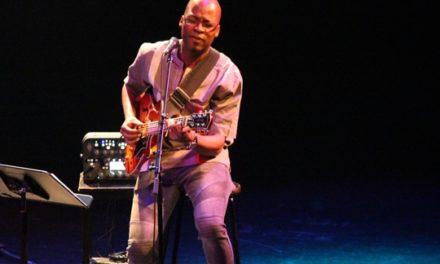 Left Side of the Balcony: Broadly Defining an Art Form

Wednesday’s Briefing: KPFA’s building is heading to auction for non-payment of taxes; School may be named after Michelle Obama