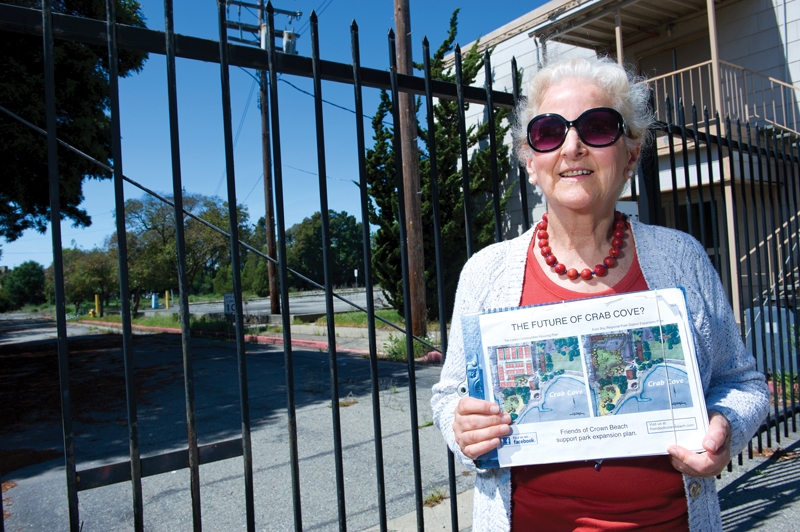 Karin Lucas is on the side of parks.

Alameda’s park defenders are waging an all-out struggle for 4 acres of surplus land near Crab Cove.

Bitter land disputes aren’t exactly rare in Alameda. But even by local standards, the struggle for 4 acres of land near Robert W. Crown Memorial State Beach has become exceptionally intense.

Spanning eight years, the fight has sucked in local, state, and federal agencies; spawned a lawsuit; and pitted two of Alameda’s most progressive movements against each another.

The trouble started in 2011 when the East Bay Regional Park District was outbid by developer Tim Lewis Communities in a public auction held by the General Service Administration for 3.89 acres of surplus federal land near Crown Beach, with TLC bidding $3.025 million against the park district’s $1.5 million. The district had been trying to acquire the land since 2006—first through a request of “public benefit conveyance,” the means by which the federal government can give unused property to state, local, and some nonprofit entities at no cost if the public benefits, and then with money raised by a bond measure, Measure WW, to preserve open space.

In June 2012, Alameda approved a Housing Element in the city’s General Plan, bringing the city into compliance with state law and opening it to the development of multifamily housing for the first time in 40 years. The draft for 2007–2014 included the land parcel at Neptune Pointe, which was rezoned for residential use from its open space designation. TLC proposed a 40-unit housing development on the parcel.

In a letter filed with the city manager on Oct. 4, 2013, the district expressed surprise and anger that the city rezoned the land without properly notifying it or performing the necessary environmental impact report. A month later, the park district sued the city, demanding the property be rezoned as open space and contending the rezoning change allowed a land use—residential housing by a private developer—that is incompatible with the nearby park facilities.

Andrew Thomas, Alameda’s city planner, said the city sent letters to all property owners within 300 feet of the parcel, which should have included the district, and had an existing environmental impact report that enabled the rezoning by adding an addendum.

“The real mystery is why the park district or a park district representative never attended a single public hearing or sent a single letter to city staff or the planning board over the multiyear public planning process objecting to the rezoning of the site,” Thomas said. He added that changing the zoning would not affect the district’s ability to build what it wants on the land, which includes park expansion, bigger facilities, extended parking, and a turnaround for school buses. “The park district’s issue isn’t the zoning; their issue is they don’t own the land,” Thomas said. “They don’t need to change the zoning to build what they want.”

Robert Doyle, general manager of the district, said that the district has been in communication with the city for years about the district’s interest in the property, and that he’s merely carrying out the will of the voters who approved Measure WW.

“We showed up at the city numerous times to get them to support the purchase of this property,” Doyle said. “This was about an effort for a developer to come in and convince the city to rezone it, throw it in to a stack of other properties that were being pushed through at the last minute, and not notifying their good friends at the EBRPD about what was going on.”

City Manager John Russo countered that the district has a history of “bullying” regional agencies to get its way and referenced as evidence a city memorandum indicating that it has filed 10 court petitions to block development and local projects.

While the district has been in mediation with the city since December, it also has become embroiled in a fight with the federal government that has dramatically escalated.

The state of California has refused to grant the developer the easement rights under McKay Avenue on the grounds that the utilities aren’t suitable for residential use. But the GSA, in turn, has threatened to seize the title to easements through an eminent domain action and to condemn the property, paving the way to go ahead and give the title to TLC anyway. The state attorney general’s office has promised to fight that action.

Doyle said he worries that if the GSA makes good on its threat, it could expand the precedent of using eminent domain to transfer public space to private developers.

“I can tell you in my 37 years of professional park work, I’ve never seen anything like this,” Doyle said. “Parks are always threatened by development—that goes all the way back to John Muir—but I’ve never seen this kind of calamity.”

Complicating the matter further, the threat of federal intervention has drawn Alameda’s powerful park lobby into the fray. The Friends of Crown Beach group launched a petition drive on March 9 for an initiative that would re-zone the parcel for open space. Karin Lucas, a former city councilmember and an organizer for Friends of Crown Beach, said that the measure should compel the city to fulfill its obligation to Alameda’s voters, who want the land to go to the district.

“Measure WW was approved by over 70 percent of Alameda voters, and it authorized the park district to buy the property when it became available,” Lucas said.

Gretchen Lipow, an organizer for the group, said that petitioners collected more than 500 signatures in less than a week. “We have a history in this town of supporting parks,” Lipow said. “This community is organized, and that’s what’s really nice about it, because when things like this happen, we can pull the network together.”

Alameda’s network of park activists is adept at blocking development. In 2002, voters approved an initiative placed on the ballot by Alameda activist Jean Sweeney that set aside 23 acres of the former Beltline Railroad property as parkland, dissolving a plan by the railroad to sell the land to a developer. In 2010, activists succeeded in persuading Alameda citizens to vote against Measure B, which would have opened Alameda Point for development. And in 2012, the park lobby shot down an attempt by developer Ron Cowan to build homes on the Mif Albright golf course.

Laura Thomas, the director of Renewed Hope Housing Advocates, said that Alameda’s staunchest park activists are also the strongest supporters of Measure A, the 1973 measure that banned the development of multifamily housing. Thomas said that because the Housing Element greatly weakened Measure A, these activists are fighting back through the Crown Beach issue.

“They can get people all churned up about the parks, because it’s an easy win,” Thomas said. “That parcel isn’t giving them much of a park—it’s giving them about an acre.”

Norman LaForce, the head of the Sierra Club’s San Francisco chapter, said that housing is a priority worth considering in Alameda. But he argued that there are plenty of other areas for the city to develop that aren’t adjacent to parkland.

“The fact is that the city of Alameda, particularly with the shutdown of the Alameda Naval Air Station and the associated areas around that, has all kinds of land that can be used for affordable housing,” LaForce said.

While Thomas acknowledged that affordable housing has made great strides in Alameda recently, she expressed her disappointment in the district and its supporters for prioritizing parks over people.

“They’ll say they’re here to offer parks and recreation to everybody in the Bay Area, particularly poor people,” Thomas said. “But when you fight affordable housing, that’s not what you’re doing. Then it becomes a middle-class issue: parks for people who already have housing.” 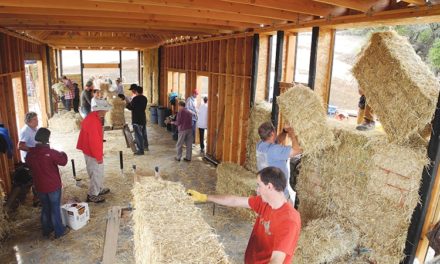 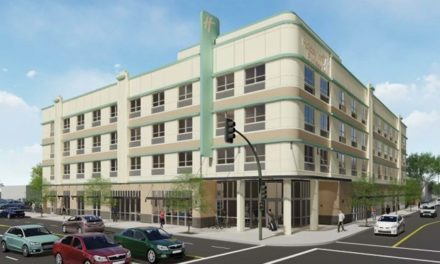 The Hotels Are Alameda Bound 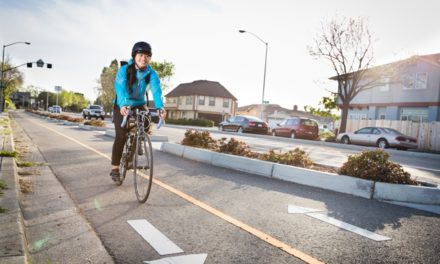 Our Backyard: Bike to the Future