New Offerings for the New Year

Introducing East Bay Made, Manor, and our first Person of The Year

In the spirit of the new year, Alameda Magazine has several new offerings in store for readers.

First, we’re introducing a new feature called East Bay Made to lead our Connoisseur section, presenting an opportunity to showcase goods created by the abundance of talented makers among us. Their wares are finding their way into exclusive Bay Area boutiques and into the homes of savvy, East Bay consumers. These crafts enrich our lives, and these artisan pioneers deserve kudos for turning once-languishing industrial spaces into beehives of incubating activity. First up is Matt Kalkstein, founder of MAKBuilt. His tiny repurposed Altoids speakers were featured in our recent gift guide, but Kalkstein has another product we are smitten with: repurposed, portable boomboxes. He custom-designs them from vintage suitcases and lunchboxes from flea markets, garage sales, reclaimed barn wood, and fence boards.

Second, we are launching a new real estate section, Manor. We’ll open each segment with The Grand Tour. Readers are in for a treat with this month’s opener, a stately but outdated 1930s-era hacienda revamped into an impressive $3.4 million ultra-modern manse with panoramic views of the bay made even more impressive through disappearing NanaWalls throughout the house. It’s an amazing transformation.

And finally, we are proud to present our inaugural East Bay Person of the Year feature, bestowing the honor upon the honorable Libby Schaaf—mayor of, yes, that city across the estuary. As you read this, Schaaf is wrapping up her first year, and what a year it has been, one with much jubilation and turmoil. The joy over an NBA championship and burgeoning construction climate has been tempered by major pitfalls like gentrification and a housing crisis that Alameda shares. The tone that Schaaf sets for Alameda’s bigger neighbor will have far-reaching repercussions both there and here—given our interconnectedness with Oakland. Mayor Schaaf deserves recognition for her commitment, courage, and grace in overseeing the East Bay’s largest city. Look for this feature in future years.

In the meantime, we at Alameda Magazine, always a work in progress, resolve to keep our 2016 content fresh, compelling, relevant, and fun. Thanks for reading.

A Very Robust Best Of Survey 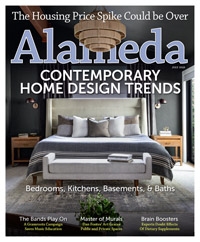 How to Spot a Harbor Seal