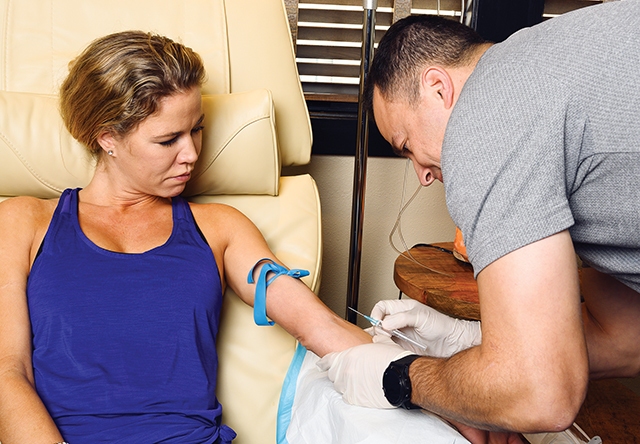 Giving intravenous fluids with nutrients works in hospitals for treating acute and chronic illnesses. The question is, does it do anything for healthy individuals?

Keara Pierce sat relaxed on a pale leather recliner as soft, classical music played in the background. A plastic bag with clear, yellow fluid hung from a pole above her head. Built-in cabinets and counters in dark wood lined the walls, and a large window provided loads of natural light. The room felt more like a comfy den than a health care clinic.

Albert Vasquez, a physician assistant, leaned over Pierce’s left arm and prepared her for the stick. “Ok, a little poke. One, two, three.” And with that, Vasquez withdrew the needle from Pierce’s vein, taped the thin catheter in place, and set the intravenous line to flow at a steady drip. Pierce had come to IV Performance Solutions, in Danville’s downtown shopping district, this Thursday morning for an infusion Vasquez called a “Myers’ cocktail,” a liter of normal saline with 5,000 milligrams of vitamin C and an assortment of B vitamins including thiamine, riblofavin, niacin, and B12.

“I’m feeling fine but I’m looking forward to feeling even better,” said Pierce, who is 38 and works out four to five days a week for an hour, plus plays tennis, swims, and lifts weights. “It’s difficult for me to stay adequately hydrated,” she added. Pierce had been getting the vitamin- and antioxidant-supplemented infusions for the three months. “I take a proactive approach to health and wellness, and there are a couple things I can do for myself like getting a massage or treating myself to an IV.”

Giving intravenous fluids with nutrients is a well-established practice in the hospital setting for treating acute and chronic illnesses like severe influenza, chronic fatigue syndrome, and fibromyalgia. Over the past few years, independent clinics and home-based infusion companies have pushed the door open wide for healthy individuals to request these infusions, often called IV nutritional therapy, which come without insurance coverage.

Vasquez launched IV Performance Solutions two years ago. Before that, he worked for an in-home infusion service, which he described as more for the party recovery scene. Dressed casually in jeans and quarter zip with the sleeves pushed up to his elbows, Vasquez, 41, said he saw an opportunity to provide athletes and people who want to stay healthy with access to hydrating infusions with a customized blend of nutrients. “I personalize the infusion to meet the needs of each client at every visit.” As a physician assistant, Vasquez can prescribe the infusions working with a supervising medical doctor who is offsite. The infusions cost between $90 and $160 and the sessions take about 45 minutes.

“The majority of my clients are healthy people trying to stay on top of their game,” said Vasquez. Most are between 25 and 50 years old, although he occasionally treats children and the elderly. A small portion of his practice, less than 20 percent, get the infusions to help manage the symptoms of illnesses like a cold, flu, migraine, or malabsorption disorders. While the infusion may relieve symptoms, Vasquez stressed that it doesn’t treat the disease.

For East Bay folks who don’t have time for the drive to Danville, The I.V. Doc, which serves Oakland, Berkeley, and Alameda, will provide infusions in the privacy of your home, office, or hotel room. Clients book appointments online and choose from an array of treatments such as Refresh, for dehydration and fatigue (for $239), Revive, for the deathbed feeling of a super hangover (for $269), Beautify, for when you want to look your best (for $399), and for symptomatic relief from food poisoning, a migraine, jet lag, or the flu (for $289-$399). Started by a surgeon, Adam Nadelson, M.D., in 2013, The I.V. Doc has expanded service to 23 cities across the United States. The infusions can be arranged as a group activity for pre-wedding, post-marathon, and corporate events too.

So why the IV? Why not drink water and take a multivitamin? Infusions centers point to the speed and efficiency of the intravenous route. The fluid and vitamins go directly into the bloodstream and bypass the gut, which can interfere with absorption. “Fluid and vitamins do enter the body more rapidly when given intravenously, but the body’s ability to use the vitamins is not any quicker,” said Nirav Pandya, M.D., director of the Sports Medicine Center for Young Athletes in Oakland. Pandya, a pediatric orthopedic surgeon who specializes in sports medicine and trauma, believes that in healthy individuals, on-demand infusions have a tremendous placebo effect. “You can achieve the same effect through oral hydration; there’s no scientific evidence to support the use of these IV infusions in healthy individuals,” said Pandya.

And a far as hangovers go, again Pandya is not convinced. “There’s a misconception about what causes a hangover. It’s not the dehydration,” he explained. “Alcohol is mostly water. It’s the toxins, the byproducts of consuming the alcohol, that the body is dealing with.” As far as athletes go, Pandya doesn’t think these infusions improve performance, unless the individual is severely dehydrated like from running a marathon. Plus, intravenous infusions come with risks like an air embolism or infection, said Pandya, which for him outweighs any benefit.

Despite the lack of evidence-based support, IV nutritionals are drawing a local audience. Vasquez’s center is open four to five days a week now, and he said the business has been growing month to month. As her IV bag emptied, Pierce felt invigorated and expected the effects last for several days. Vasquez said he typically recommends clients get infusions about once a month to start. “I’m thinking about coming more often, maybe every two weeks,” said Pierce smiling as she headed out the door with plans to go on a hike later in the day. 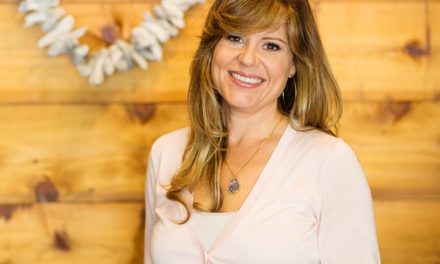 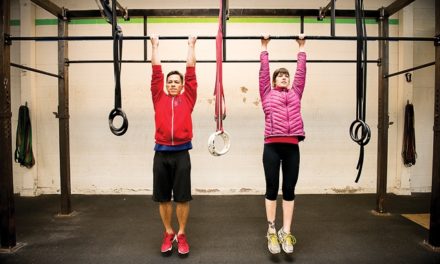 A Guide to 15 Inspired Workout Regimens 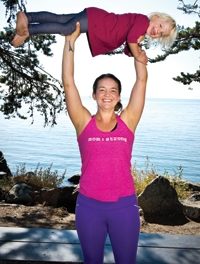 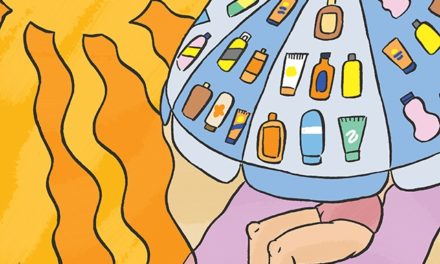