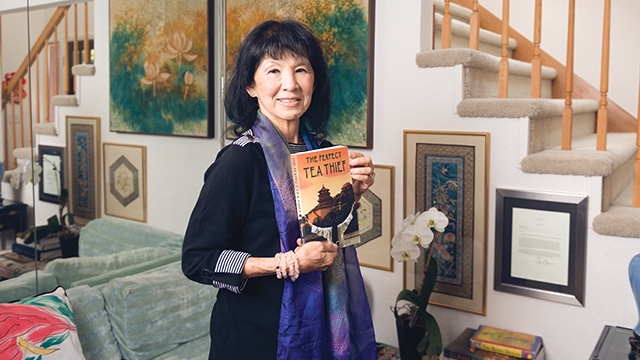 The Alameda author may be between books, but she is as occupied with words as ever through trips, reading, and entertaining kids.

Pam Chun settled into a quiet nook in the Alameda Free Library with a natural grace and then immediately steered the conversation to Tarim mummies, red-haired mummies that had been perfectly preserved for thousands of years in northern China. She spoke on the narrow topic with ease, eloquence, and authority — characteristics that apply to her and her work. After all, she did spend a decade researching her first novel, The Money Dragon. The Hawaiian native’s curriculum vitae, however, extends beyond her novels: She is a storyteller at the Asian Art Museum in San Francisco, and she hosts a longtime Alameda book club whose members delve into everything from Scandinavian mystery novels to John Steinbeck. Here’s what Chun has been up to since the 2014 release of her second novel, The Perfect Tea Thief.

Give us an idea of what you’ve been up to since you wrote The Perfect Tea Thief and whether there is another book forthcoming.

I’ve spoken at the Asian Art Museum. I’ve given talks at lots of author groups for some fundraisers. I’ve had a trip with UC Berkeley to China. We started with Shanghai, because, of course, Shanghai is where The Perfect Tea Thief begins, talking about the influence of the British on China, what they brought to China. China was known as “the flowery lands,” because when the Europeans came to China, they had never seen so many flowers. That was also the time of the 1800s and the great tea collectors, great plant collectors, the orchids, the camellias. They had never seen anything like it. So we visited a lot of gardens, and I talked about plants and that sort of thing.

As a writer, you have to wait for the well to fill up. The first book took 10 years. The Perfect Tea Thief took 10 years. I’m just waiting to find that big inspiration. So far, nothing has really, really hit me, although when I wrote The Seagull’s Gardener, I wrote that in two months. I sent it to my agent, and she called me Friday night, and she was crying and she said, “I love it.” You just never know. It’s just pulling that idea, trying to make something out of it.

Do your friends and connections participate in the book club?

The book club is just for Alameda. It was started in 2001. And this was at the old library, and the old library at the old Alameda high school was like a closet. The library had a sign up, “Are you interested in starting a book club?” Four people showed up, and none of us had ever been in a book club. We started it and we meet the second Monday at the Alameda Free Public Library. It’s quite an eclectic mix. We have one woman who is a retired editor from the University Press. One woman is a retired librarian from UC Berkeley. We have a couple librarians from here. One’s a project manager for Oracle. He comes to the group from San Francisco. The other person who is still in the book club from the original four was an artist in town. So we have this eclectic mix, and we choose fiction, nonfiction, great books, things we like. One book we all really liked was The Gentleman From Moscow. It was just an amazing book. Another one was The Soul of an Octopus. Hawaiians and Chinese eat everything, but I’m never eating octopus again. We also do a lot of history. This one person in the group, his wife works in some sort of nature reserve, so she knows all about owls. We read another book, H Is for Hawk, so then he brought in these videos of owls and instructions on how to build an owl house and owl nesting.

As a writer, does this book club — and being exposed to different titles and genres — help the creative process?

What really keeps me on my toes, though, is I’m a storyteller at the Asian Art Museum, and I’ve been a storyteller there for maybe 20 years. I do second- and third-graders, and they’re really smart — just before the cynical age, just before the all-questioning age. In the Asian Art Museum, you take them in, you teach them how to read a scroll, “What is the artist trying to tell you? Where is the story in the scroll? Do you see anybody in there? How big are they? How big is the mountain? So what does that tell you? What is more important?” It’s the landscape. It’s the world. And you see all those little light bulbs go off. I always come home and I feel really inspired by these little kids. They’re always learning, and they pick up on things that sometimes we, as adults, get blasé about.

Is there a difference to being Asian American in Hawaii compared to in California? You were talking about different dialects in each area, as well as more mixed-race people in Hawaii.

When you grow up in Hawaii, you grow up in a mixed group, and so your friends are Chinese, Japanese, Filipino, Hawaiian, Caucasian, and you’re used to getting along with everybody. Whereas when I came to Cal, they have all these Chinese groups, and I didn’t feel compelled to join any of them, because I didn’t feel like I needed to identify with one particular group or another. I know a lot of kids did. They would ask me, “Do you belong to the Chinese-American group? Or do belong to another group?” And I would say, “Neither of those!” I didn’t feel compelled to. Everyone belongs to everything in Hawaii. Our school was pretty ethnically mixed. I think it’s great, because the foods are mixed. So banquets or even cooking food at home, at Christmas or New Year’s, you have the turkey, you have the Chinese noodles, and you have the Japanese sushi. And my aunts and uncles — they weren’t Japanese, but they made the sushi. My mom made the best sushi for going to picnics to the beach. We had Kalua pig, which is Hawaiian. My father would bake salmon. We had such a mixture of foods.

I have read about the recent volcanic eruptions. Do you have any family in the area?

I have classmates there. I have a classmate who runs a big farm, fruit farm, on the slopes of Kilauea, so we’ve been keeping track on Facebook and on the news. I remember as a kid, we used to visit the volcano, and we’d stand around the edge of the volcano, and we’d look down. What did we know, right? And now it’s chasing people down the mountain, covering homes, into the sea. It’s very, very dangerous, because that fog, volcanic sulfuric acid, is really bad for your health, so I’ve been keeping track of my classmates in Honolulu, and they’re watching to make sure trade winds keep blowing. Quite fortunately, the trade winds keep blowing. If the trade winds stop, we get what’s called the Kona wind, and it’s going to bring the fog into Honolulu. And we don’t have air conditioning in Honolulu, so that fog will go everywhere. 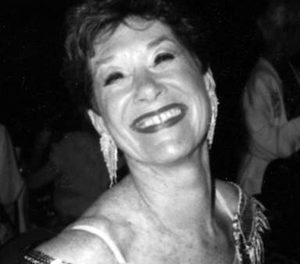 They Made a Brighter Future 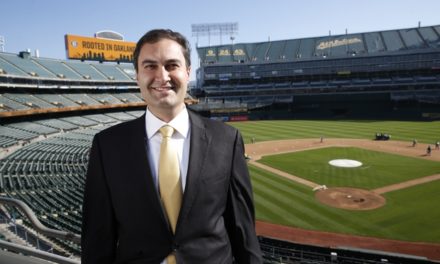